Earlier this year I spent some time modernizing and improving Balrog's toolchain. One of my goals in doing so was to switch from Travis CI to Taskcluster both to give us more flexibility in our CI configuration, as well as help dogfood Taskcluster-Github. One of the most challenging aspects of this was how to build and push our Docker image, and I'm hoping this post will make it easier for other folks who want to do the same in the future.

Let's start by breaking down Task definition from Balrog's .taskcluster.yml. Like other Taskcluster-Github jobs, we use the standard taskcluster.docker provisioner and worker.

Next, we have something a little different. This section grants the Task access to a secret (managed by the Secrets Service). More on this later.

The payload has a few things of note. Because we're going to be building Docker images it makes sense to use Taskcluster's image_builder Docker image as well as enabling the docker-in-docker feature. The taskclusterProxy feature is needed to access the Secrets Service.

The extra section has some metadata for Taskcluster-Github. Unlike CI tasks, we limit this to only running on pushes (not pull requests) to the master branch of the repository. Because only a few people can push to this branch, it means that only these can trigger Docker builds.

Finally, we have the metadata, which is just standard Taskcluster stuff.

I mentioned the "Secrets Service" earlier, and it's the key piece that enables us to securely push Docker images. Putting our Dockerhub password in it means access is limited to those who have the right scopes. We store it in a secret with the key "repo:github.com/mozilla/balrog:dockerhub", which means that anything with the "secrets:get:repo:github.com/mozilla/balrog:dockerhub" scope is granted access to it. My own personal Taskcluster account has it, which lets me set or change the password:

We also have a Role called "repo:github.com/mozilla/balrog:branch:master" which has that scope: 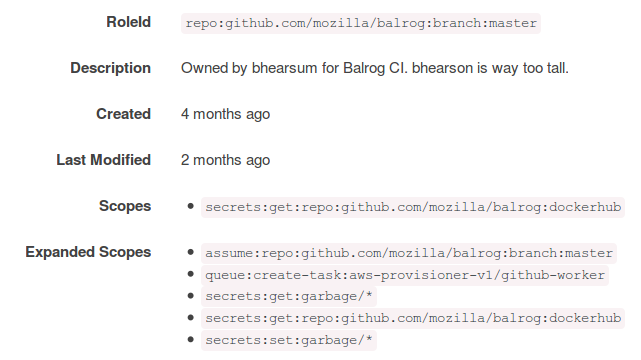 You can see from its name that this Role is associated with the Balrog repository's master branch. Because of this, any Tasks created for as a result of pushes to that branch in that repository and branch may assign the scopes that Role has - like we did above in the "scopes" section of the Task.

The last piece of the puzzle here is the actual script that does the building and pushing. Let's look at a few specific parts of it.

To start with, we deal with retrieving the Dockerhub password from the Secrets Service. Because we enabled the taskclusterProxy earlier, "taskcluster" resolves to the hosted Taskcluster services. Had we forgotten to grant the Task the necessary scope, this would return a 403 error.

We build, tag, and push the image, which is very similar to building it locally. If we'd forgotten to enable the dind feature, this would throw errors about not being able to run Docker.

Finally, we attach an artifact to our Task containing the sha256 of the Docker images. This allows consumers of the Docker image to verify that they're getting exactly what we built, and not something that may have been tampered on Dockerhub or in transit.

Now that you've seen how it's put together, let's have a look at the end result. This is the most recent Balrog Docker build Task. You can see the sha256 artifact created on it: 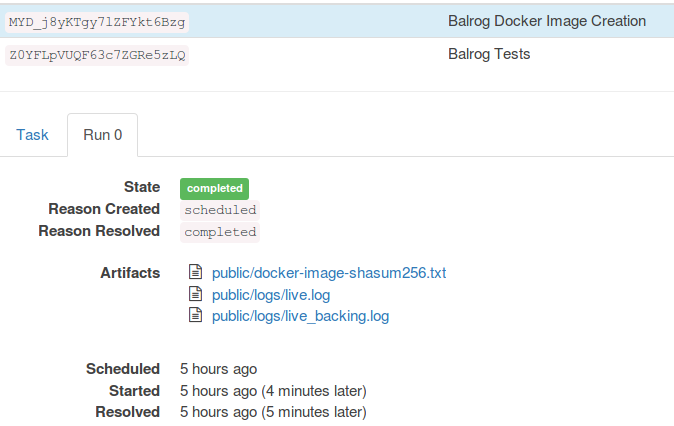 And of course, the newly built image has shown up on the Balrog Dockerhub repo: